Medivet’s Leon Ringelmann is gearing up for an epic cycle ride to raise much-needed funds for a local animal rescue centre. 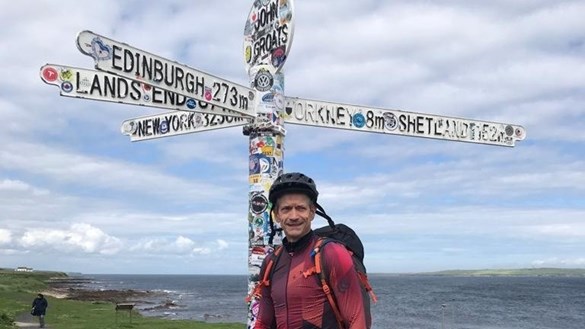 The keen cyclist, who underwent hip replacement surgery last year, is hoping to complete the 900-mile journey from John O’Groats to Lands' End this month to raise funds for New Hope Animal Rescue in Herne Bay.

I’m overwhelmed by the generous response that I’ve received so far.

Leon, who is the Branch Partner and Lead Vet at Medivet 24 Hour Dartford, hopes to rack up over one hundred miles a day during his two-wheel challenge. His team at the Essex Road-based emergency centre will be cheering Leon on during his bid to boost the charity’s coffers. Its co-founder Niall Lester is a local authority animal welfare officer and has a long-standing relationship with the Hospital.

Niall set up the New Hope charity with co-founder Steph Derry back in 2000 and has since sold his own home to expand operations. The centre specialises in helping abandoned animals as well as those with special medical needs.

“I’m overwhelmed by the generous response that I’ve received so far,” said Leon. “I’m building up my training regime on the roads of leafy Kent, with strong headwinds helping my preparation ahead of the impending John O’Groats departure. Niall and Steph’s work at the New Hope Animal Rescue Centre is an incredible labour of love and I can’t think of anyone more deserving of the proceeds for this trip.”

Anyone wishing to support Leon’s athletic endeavour on two wheels can support him via his JustGiving page at https://www.justgiving.com/crowdfunding/leon-bike-ride

Medivet 24 Hour Dartford operates around the clock, 365 days a year, offering emergency help for animals if a local veterinary practice is not open. With the latest technology and facilities, its well-equipped clinics are manned by a highly qualified, dedicated night staff to ensure animal patients receive exceptional care.