A heart-wrenching story of how one couple are turning their tragedy to save others from the same heartbreak.

D’Artagnan was a Christmas miracle. A promise in a card by my then boyfriend (now husband) that we would finally get the fluffy family member I’d been begging for.

After searching through endless posts on Pets for Homes, Battersea, Mayhew and Gumtree, we found him. A few, slightly grainy photos of a fluffy, ginger male, just 9 months old. The couple who had him lived on the 10th floor of a sky-rise in Canary Wharf, and he was bouncing off their walls. I got in touch with the wife, and assured her that not only was I cat-mad, but that Chris and I had both grown up with cats, and that we had a large maisonette home in south London with garden access so that he could go exploring. She liked the sound of us, and so we arranged to meet.

The second we saw him, we knew. It seemed that he did too, for he came straight up to us and started weaving in and out of our legs, rolling over to show off his fluffy tummy. The woman was slightly stunned, ‘He’s never done that to strangers before,’ she said. It was love at first sight, and we took him home with us that day.

They called him Miso, but that didn’t seem to suit this larger-than-life character, constantly bouncing around, climbing up doors and windows; his little whiskers into every box, bowl, nook and cranny. We wracked our brains but finally settled on D’Artagnan, our very own adventurous Mouse-keteer. Dart for short also seemed highly fitting, as he was forever darting about. 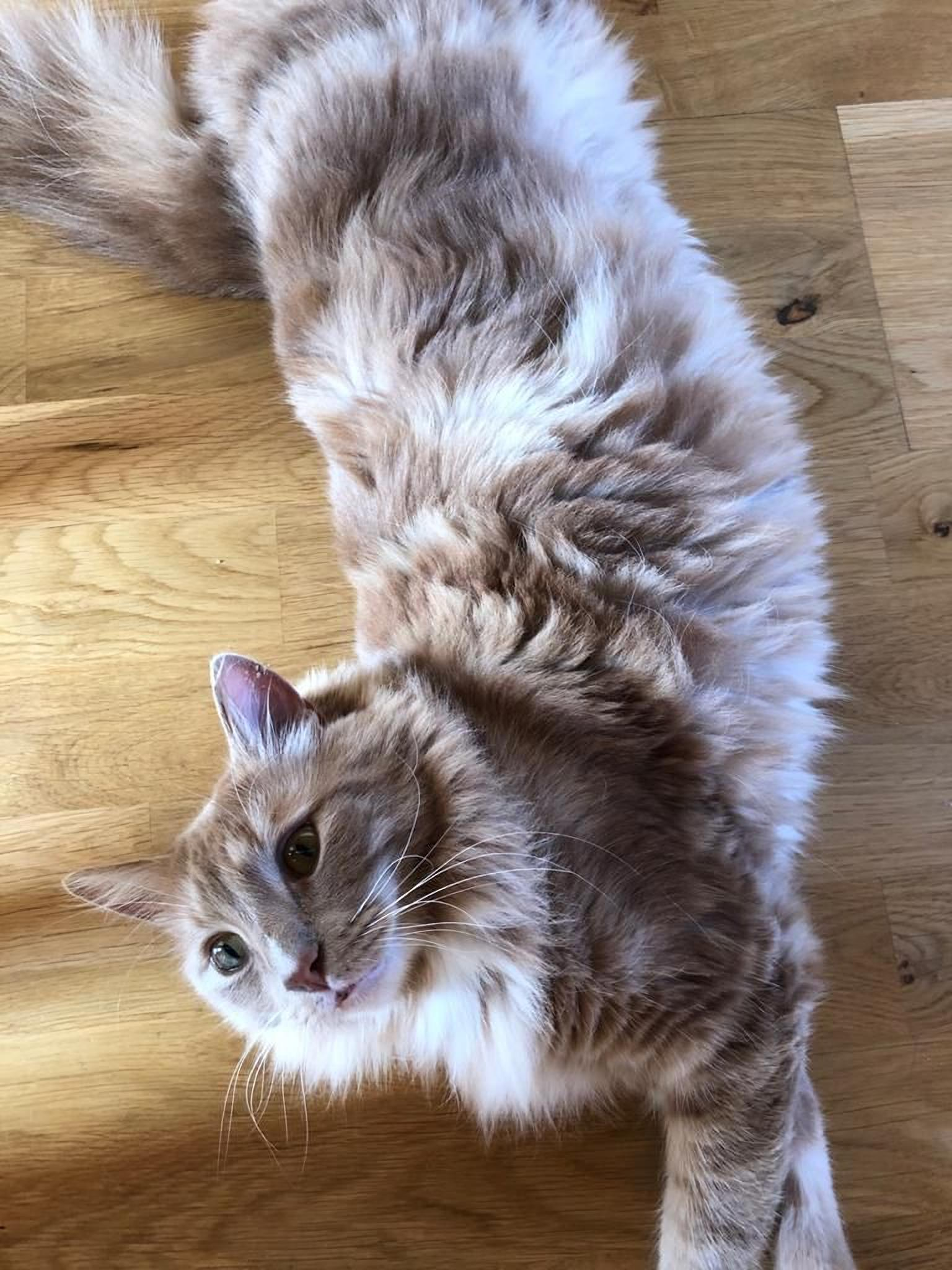 It sounds cliched, but Dart really did bring us joy every day. Whether it was yowling at the top of his lungs for food, pottering about in the neighbours’ gardens, or falling asleep in the bath-tub, he cheekily charmed everyone who met him. He made our house a home, and completed our little family.

He was truly obsessed with food, too. With his fluffy ginger coat and big, bottle-brush tail, we used to joke he was more fox than cat, and he scavenged accordingly. We’ve lost count of the occasions that our neighbours have - somewhat exasperatedly, but always with affection - told us of the times he sauntered into their kitchens to beg, borrow or steal some supper. Food from humans, other cats, dogs - it didn’t matter to our Dart, who’s appetite, like his personality, was larger than life. This was a cat who would eat bread, cake, cheese, butter and rice with abandon, and woe betide the person who left their tikka masala curry unattended.

We should have had many more years with our beautiful boy. We had recently got married, and were already starting to talk about next steps, a bigger house with a better garden and a safer road. How Dart would be around a baby, around kids. What our family would look like.

We were enjoying a lie-in on Saturday 22nd January, a rarity for my husband, who doesn’t sleep particularly well. So I chose not to reply to our downstairs neighbour’s message to pop round as soon as we could. When I did reply about thirty minutes later, I got a funny feeling in my stomach when she asked us to come down-stairs. As I threw on some sweatpants and Chris’s coat, he called out to me, ‘Where’s the cat?’

The second I saw her face I knew. I remember repeating ‘oh no’ again and again and hollering up the stairs for Chris to come as quickly as he could. Dart was in a Sainsbury’s Bag for Life, the irony and ignominy even then not lost on me. Our neighbours were crying as they handed him over to us, explaining that another neighbour, had found him on the side of the road. That our beautiful, vibrant boy had been hit by a car, that the driver hadn’t stopped.

The look on Chris’s face when he saw me with the Sainsbury’s bag - I’ll never forget it. Fear and shock etched into every line, reflecting my own. Our neighbours kept saying how sorry they were, and we kept telling them it was ok, it was alright, not wanting them to feel bad for having to break the worst news to us.

We took Dart home. We cradled him in our arms and I sobbed. We cleaned the blood off his nose, the only mark on his little body to show the trauma it had been through. He could have just been sleeping. He was still warm and I remember begging over and over for him to just wake up, to just come back to us.

It’s difficult to explain to family and friends what this grief feels like. How it will unexpectedly hit me at the strangest of times. How quiet our home is. It has been just over two weeks and I think that people expect us to be ok. He was a pet, this can’t be like losing a ‘proper’ family member. Except that it is. He was our fluffy baby, and we miss and mourn him every day.

That is why we decided to launch our petition, with the aim to get the government to change the Road Traffic Act of 1988 and legally require a driver to stop and report accidents with domestic cats. Chris and I were lucky - if you can call it that. We got to take our boy home, and say goodbye, but as we began to reach out to online communities, neighbours, and friends, we realised how many thousands of cat-owners never find out what has happened to their treasured pet, and never get that kind of closure.

There is no reason at all why the Road Traffic Act should list dogs, sheep, pigs, mules, goats and horses as animals to be reported, but leave cats off that roster. With a change coming into effect this year requiring all cats to be microchipped by law, the RTA seems even more out of date.

We want some good to come from such a senseless and violent thing. We want people to know that we understand and recognise their grief when this happens, for it is ours too. We want Dart’s life to stand for and represent something good. Thank you for your support.