Meet brave Mowgli, a 16 year old cat a patient at our Medivet Pinner branch, who was recently diagnosed with stomach cancer. 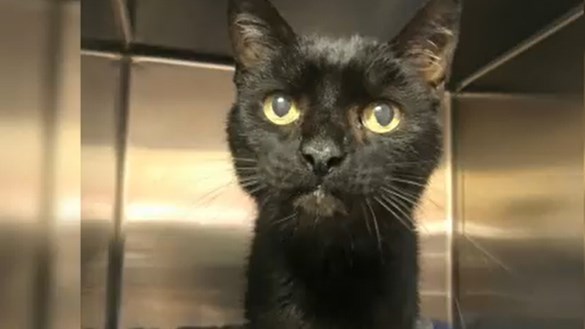 Earlier in the year, Mowgli’s owners noticed that he had gone off his food, and had begun vomiting, and so quickly took him to see Reena at Medivet Pinner. After quickly conducting an ultrasound on Mowgli, Reena discovered a large tumour which was taking up most of the space in his stomach.

Mowgli was very weak. The tumour was inoperable, and Reena was worried he wouldn’t survive a general anaesthetic, but his heartbroken owners couldn’t bear the alternative of euthanasia, and decided it was better to try.

In order to discover the type of cancer and how best to treat it, Reena took a sample (biopsy) of the tumour from Mowgli’s stomach. To do this, she stabilised him with an intravenous drip and sedated him and used an ultrasound to guide her in taking the biopsy.

The results came back, confirming a type of cancer called Gastrointestinal Lymphoma – one of the most common types of cancer in cats, usually found in the small intestine, but can involve any part of the digestive system. Fortunately, this type of cancer is responsive to chemotherapy.

Cats tend to tolerate chemotherapy much better than humans, often with very few, if any, side effects. Whilst not always curable, effective treatment can mean a normal quality of life for a good period of time, and most of the time, temporarily eliminating all signs of lymphoma.

Thankfully, throughout Mowgli’s chemotherapy treatment, and regular check-up appointments, the vets could feel the tumour in his stomach shrinking.

Happily, on his last ultrasound scan, the tumour had gone. Mowgli has his appetite back, and now has a belly full of food instead. The team at Medivet Pinner are pleased to say he is now in remission and doing well, and this much-loved little cat had very few side-effects from the chemotherapy and is now living a content and cancer-free life.