A young dog in training to carry out security work has been sent to the bottom of the class after swallowing the padlock to her kennel.

Seven-month old Beau lives with her owners Jake Wallington and Megan Clarke in March, Cambridgeshire. Mr Wallington is training her to work with him on security projects and, as part of her training, she spends some time living outside in a large kennel.

Megan recently spotted the key to the kennel’s padlock in Beau’s mouth. She quickly removed it but realised that the padlock was also missing. Suspecting the worst, she and Jake searched and, when they found no sign of it, they rushed her to Medivet Long Sutton where vet David Iturregui Uria took an X-ray and quickly located the padlock in her stomach. He operated on Beau immediately to remove it and she is now recovering at home. 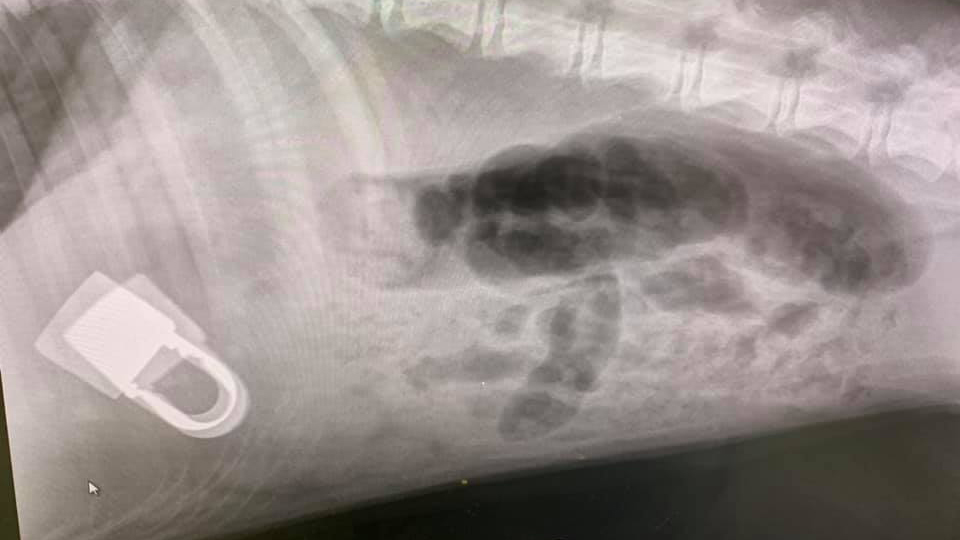 Megan said: “Beau is an incredibly energetic, bouncy dog and is really enjoying her training with Jake. The padlock to her kennel was up on a high shelf and we have no idea how she managed to reach it – but, somehow, she did. While she showed no outward signs of distress, when I saw the key in her mouth and then realised the padlock was missing, I was absolutely horrified. While she was undergoing surgery Jake and I sobbed our hearts out.

“We were so relieved when the surgery went well and to be able to bring her back home. She’s having to take life easy for a while, which she doesn’t like, but we hope she’ll be back to her training in a few weeks.”

Medivet vet David Iturregui Uria said: “Beau was lucky that the open padlock did not get stuck in her throat, her oesophagus or her stomach. She needs to stop trying to become the next Houdini!

“Megan and Jake did well in getting her to us so quickly. She’s a lovely dog and is making a good recovery.”