A vet from Medivet West Byfleet is urging owners to microchip their pets after a Surrey family was reunited with their cat, Smokey, who went missing six months ago. 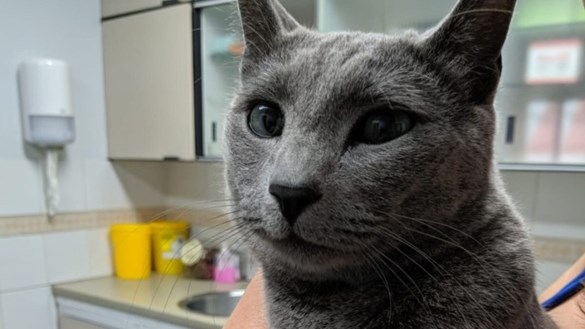 Smokey’s owner Claire Clough was aware that her two-year-old Russian Blue was an adventurous soul, as he regularly followed her to the train station or visited nearby old people’s homes.

She said, “Smokey is known for being a bit of a wanderer, so we had already made good use of his microchip, which was fitted when he was just a few weeks old. However, in early February he really did go missing. I must admit that after four weeks of no news, we (and his sister Willow) had given up hope of finding him.”

Two weeks ago, while Claire was on holiday, she took a call from a vet 83 miles away and was told some remarkable news. Smokey was alive and well, awaiting collection in Folkestone. Thanks to a straight forward microchip scan, Claire had quickly been identified as Smokey’s owner.

“Apparently, he had been visiting a local garage for nourishment,” Claire continued “but was very thirsty and had a slight limp. We’re just so grateful that the local vet took him in and that we were called immediately.”

After being checked over by the family’s local practice in West Byfleet, Smokey was given a clean bill of health and was even found to have put on a little weight.

Medivet West Byfleet Branch Partner Hannah Zheng said, "We strongly recommend getting your pets microchipped for this very reason. It is a very simple, quick and inexpensive procedure in which a tiny device, no bigger than a grain of rice, is placed under the skin of your pet's neck. Each chip carries a unique identification number, together with the owner’s contact details, which is held on a secure database.”

Claire concluded, “After the check-up we were told that Smokey had actually put on 100 grams over the course of his adventures. He has now settled back in really well under the watchful eye of his sister Willow. There is absolutely no way he would have been back here with us without his microchip.”