Kind-hearted Kelly Graham-Smallwood has put her creative talents to amazing use in honour of Medivet’s efforts to save endangered rhinos in Africa. 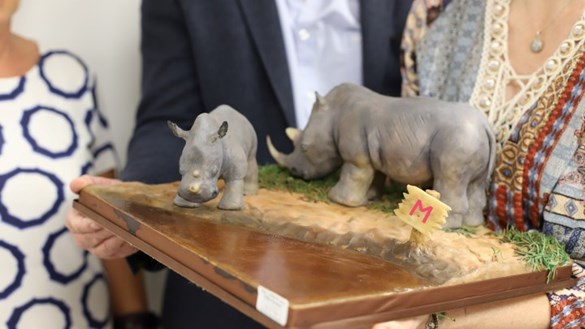 The This Morning presenter was moved to tears when he visited a conservation area during a trip to South Africa – helping to tag pregnant Themba in a bid to protect her from poachers.

The emotional encounter was organised by Dr Will Fowlds, a former Medivet vet who now works for Wilderness Foundation Africa, the charity supported by Medivet through staff fundraising initiatives and generous client donations as part of their Saving The Rhino campaign.

Kelly, a professional patisserie chef, spent time with Dr Will Fowlds and saw for herself how money raised is helping to protect these endangered animals. She was accompanied on the trip by Medivet Canvey Island Branch Partner Lizzie Kwint.

“I wanted to do something to thank Lizzie, Medivet and the Wilderness Foundation Africa for the amazing experience,” said Kelly, whose chocolate handiwork recently won her a silver award at London’s Cake International event.

“It seemed a fitting week to present Medivet with Themba and Schofe to celebrate their Saving The Rhino campaign, and mark the recent achievement of reaching one million client donations.”

The amazing cake has been on display throughout this week at Medivet’s Watford Support Centre. 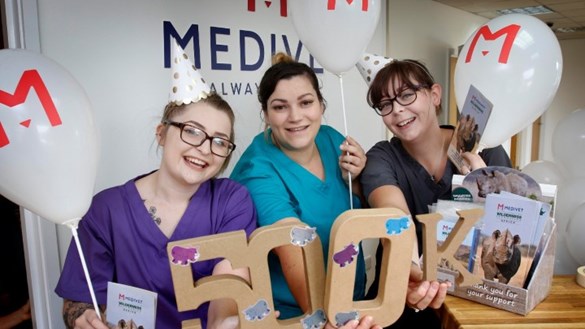 Medivet clients have made an incredible one million donations to raise £500,000 for the Medivet Saving The Rhino campaign with Wilderness Foundation Africa.