A Dorchester vet has been hailed a hero after saving the life of a dog who swallowed a 9 inch stick. 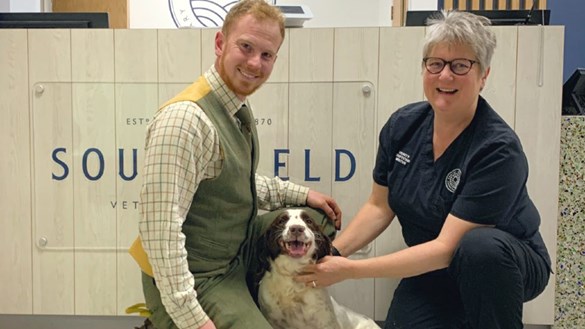 Against all the odds, four-year-old Spaniel Brook has made a full recover thanks to the quick thinking and expertise of Medivet 24 Hour Dorchester veterinary surgeon Verity Griffiths, who removed the stick – still in one piece – from Brook’s stomach.

It is not an exaggeration to say that Brook had a miraculous escape.

The dog collapsed while on a country walk with her owner Tom Bevins. The emergency appointment the next day, and Verity’s surgery skill, saved Brook’s life.

“We didn’t see exactly what happened to Brook as she was out of sight running in woodland, but we both heard a loud squeal. It was obvious something was wrong as her demeanor changed completely, said Tom, a local gamekeeper.

“Our normally bubbly and bouncy girl just didn’t want to continue. Our first thought was that she’d either twisted her stomach chasing a bird or swallowed a dead bird’s bone.”

After deteriorating rapidly overnight - refusing to eat or drink and then developing a fever - Brook was taken into the practice, on South Walks Road. An X-ray clearly showed the stick in the dog’s stomach and within minutes Verity and her team were preparing to operate.

“It is not an exaggeration to say that Brook had a miraculous escape,” said Branch Partner Verity. “Millimeters to either side and this would have been a very different outcome.”

Just two days later, Brook was discharged from the practice and returned home to an incredibly grateful Bevins family.

“I must admit, once we knew about the severity of the issue, we thought we were going to lose Brook,” added Tom. “Verity and her team did a phenomenally professional job from the moment we walked into the Hospital. It’s miraculous that we still have her and we just cannot thank them enough – they’re all superstars.”