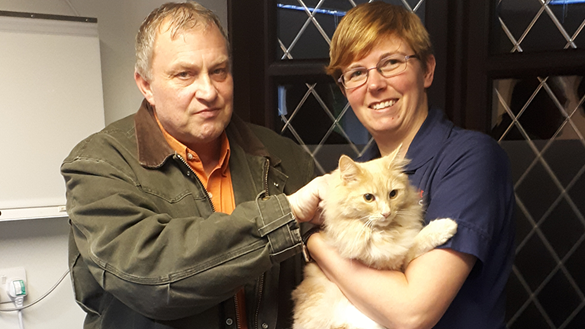 A resident of Smallgains on Canvey Island, Mr John Morgan, is warning cat owners to be vigilant following the shooting of his cat, Jack, with an air rifle on 14 January.  Jack was treated at Medivet on Canvey Island and is now recovering.

18-month old, ginger cat Jack likes to explore the allotments at the bottom of his garden, according to Mr Morgan.  On the day of the shooting, he came home with blood around his neck.  He also hissed at Mr Morgan which was very out of character.  Initially Mr Morgan thought he had been in a fight but, the next day, Jack started limping so he took him to Medivet where vet Ian Ward examined him and found a round wound near his shoulder.  An X-ray showed an air rifle pellet lodged close to Jack’s spine.

“I couldn’t believe it when I found out that Jack had been shot,” Mr Morgan said: “My neighbours told me that another cat was shot on the allotments about six months ago so, now that it has happened to poor Jack too, I want to warn all cat owners in the area to keep a close eye on their cats.  I’m glad to have Jack safely back at home but it’s worrying to know that it could happen again.”

Vet Lizzie Kwint at Medivet Canvey Island said: “The pellet that hit Jack is lodged very close to his spine so removing it surgically is risky.  Over time, though, his body will build a ‘wall’ around the pellet and he should be able to get on and live a normal life.   He has had a lucky escape though.  These weapons can be very dangerous and this incident is shocking.

“I urge all cat owners to keep a close eye on their pets and to contact their vet immediately if they suspect that their cat has been injured by an air rifle.”