A north London pet owner is delighted after being unexpectedly reunited with her missing Yorkshire Terrier three and a half years after it first disappeared. 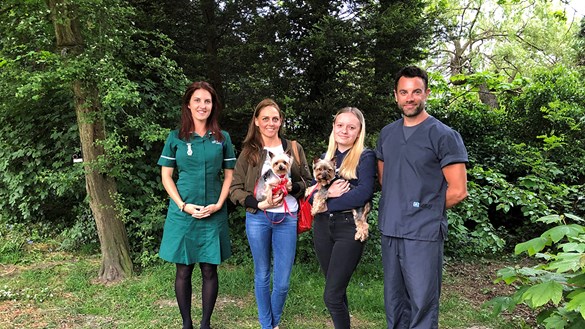 The owner thought the family’s beloved Yorkie Bambi was gone for good after giving up their search a few months after he vanished back in July 2015. But, to the family’s disbelief, Justina Fisher took a call from Medivet’s 24 hour Hendon practice telling her that her dog had been handed in.

Mrs Fisher said: “We are still in total shock and really just can’t believe it. We are so grateful to the whole the team at Medivet 24 Hour Hendon for taking him in, scanning him and reuniting us. We are incredibly thrilled to have our dog back, although his mate Zuza is finding the adjustment a bit more of a challenge.”

The family were reunited with the little Yorkie within an hour of the call and now want to tell other pet owners who have lost their animals not to give up hope.

“Obviously, after losing Bambi, the whole family was very upset, but his mate Zuza became depressed.

Because he is an adventurous little dog we had him microchipped, so never really gave up hope.

We are not sure what happened to Bambi over those three years, but are just so happy to have him back and get him back to full health.”

Jerry Dunne, Branch Partner at Medivet 24 Hour Hendon, added: “One of the most privileged aspects of being a vet is being able to witness that incredible moment when owners are reunited with their lost pets. This is only possible, of course, if the animals are microchipped in the first place and members of the public actually take the time and effort to hand in ‘stray’ animals to a vet.”

Microchipping a dog is not only compulsory, but simple and speedy. The chip is usually inserted around the scruff of the neck and is done in a matter of seconds. While it may be slightly uncomfortable for some dogs, others don’t even notice it is happening.